Netflix (NFLX 2.83%) is scheduled to report fiscal 2022 second-quarter earnings after the markets close on Tuesday, July 19. The streaming pioneer’s stock has been down 69% in 2022 as it grapples with headwinds from the economic reopening and rising competition.

Investors will be laser-focused on Netflix’s subscriber figures when it releases second-quarter results. The company has told investors to expect a loss of 2 million subscribers for Q2. If it reports subscriber numbers that are better than expected, it could be the catalyst that lifts the stock higher. Let’s consider what else investors should be watching for in Netflix’s second-quarter financial results.

Subscriber growth will take center stage for Netflix in Q2

Netflix thrived at the pandemic’s onset as demand for in-home entertainment soared. The trend is reversing, and Netflix is ​​having difficulty maintaining people’s attention. The company lost 200,000 subscribers in its first quarter, which ended on March 31. It’s forecasting a loss of 2 million more in Q2. The losses are due to more than just the economic reopening.

Several competitors launched streaming services during the pandemic that are mostly priced lower than a Netflix subscription. The combination of lower prices and new content prospects is attracting consumers to the newer services. To counter this competition, Netflix acquiesced to long-running calls from shareholders to add a lower-priced ad-supported service tier. Investors will want to look for what management has to say about progress on developing the ad-supported version. Initial expectations were that the service could be up and running as early as the end of this year.

Lower prices could attract more subscribers who were on the fence about joining Netflix. This can be especially true for lower-income consumers. Netflix must be careful, however, not to cannibalize its own customers. A lower-priced ad-supported tier could attract current customers to pay for the higher-priced tier. Careful consideration must be made to calculate how much advertising revenue per user could be earned to offset the lower subscription price. Needless to say, this will not be an easy task.

The good news for shareholders is that Netflix is ​​comfortably profitable. The company generated $ 1.6 billion in net income in its most recent quarter on revenue of $ 7.9 billion. That gives the company a margin of safety to experiment with the incremental impacts of the changes.

What this could mean for Netflix investors

Analysts on Wall Street expect Netflix to report revenue of $ 8.05 billion and earnings per share (EPS) of $ 2.97. If the company meets those targets, they would be increases of 9.60% and 0%, respectively, from the same period last year. Still, the subscriber figures and forecast are likely to take center stage and significantly impact Netflix’s stock price following the earnings release. 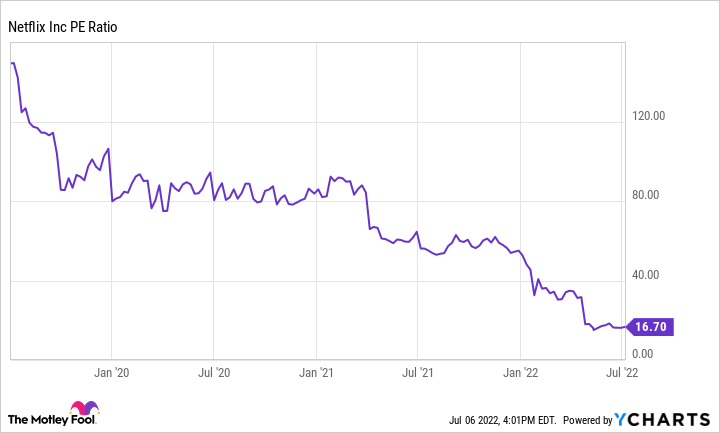 Netflix is ​​trading at a price-to-earnings ratio of 16.7, near the lowest in the last five years. Any signs of a turnaround in subscriber losses or optimism from management on subscriber growth in the longer term could lift the stock higher.