The third player off the board in the 2022 NFL draft was David Ojabo in the second round to the Baltimore Ravens.

Before Ojabo ruptured his Achillies Tendon during Michigan’s pro day, Ojabo was assuredly a top 15 pick during the draft, but injuries will change that. Ojabo fell down to pick 45 before the other Harbaugh decided to snatch him up.

Ojabo will now be playing for Jim’s brother, John Harbaugh, at the Ravens, but he will also be playing for another familiar face. Mike Macdonald, who was the defensive coordinator at Michigan for one year, went back to the Ravens this past offseason to become Baltimore’s defensive coordinator. Once Ojabo gets back to full health, he won’t have much to learn from a schematic standpoint since he ran a similar defense at Michigan.

As you can imagine there were plenty of opinions on the selection from the draft experts, and here are some of the ones we could find talking about David Ojabo.

Draft grades for the Cincinnati Bengals and Daxton Hill

Mel Kiper Jr. with ESPN.com gave the Ravens an A grade, and he loved the Ojabo pick.

PFF thought the Ravens had an outstanding draft and gave them an A+ grade. PFF calls the Ojabo pick “great value”.

Day 2: Ojabo reunites with close friend and high school teammate Odafe Oweh and Michigan defensive coordinator Mike McDonald. The pass-rusher was once seen as a possible top-20 pick, but after a ruptured Achilles at his pro day, he slid to the middle of Round 2, where he became a great value. Ojabo is an extraordinary athlete who flashed top-tier talent this past season, producing multiple elite pass-rush game grades above 90.0. At the same time, his production was somewhat inconsistent, and his run defense is a big issue. He played just 560 snaps in college and has been playing football for less than five years. Nonetheless, while he’s far from refined, he has a high ceiling with his tools.

Chris Trapasso with CBS Sports thought the Ravens had an A- draft, and he gave the Ojabo selection a B+ grade.

Alex Ballentine with B/R gave the Ravens an A+ draft, and he was very high on the Ojabo pick.

The good news just kept coming for Ravens fans. David Ojabo could have been a top-15 pick before tearing his Achilles, and Ian Rapoport of NFL Network noted he could be ready to go by October.

Vinnie Iyer with Sporting News really, really liked the Ojabo pick – he gave it an A+.

The Ravens love Odafe Oweh, their late first-rounder from 2021. Ojabo is his best friend and also was inspired by his explosive, relentless play in getting after the quarterback, a reason why he rose up boards fast through the Combine before suffering an Achilles ‘injury at his pro day. Baltimore can stash Ojabo for the future as an impactful situational pass rusher at first.

Danny Kelly with The Ringer gave the Ravens an A+ draft and called Ojabo a top-15 talent.

The Ravens took a top-15 talent in Michigan pass rusher David Ojabo with their first pick on day two, smartly rolling the dice that the former Wolverine will regain his prior form after suffering an Achilles tear at his pro day.

Doug Farrar with TouchdownWire didn’t give an actual grade on the Ojabo pick, but he did say it was one of the best picks of the second round. 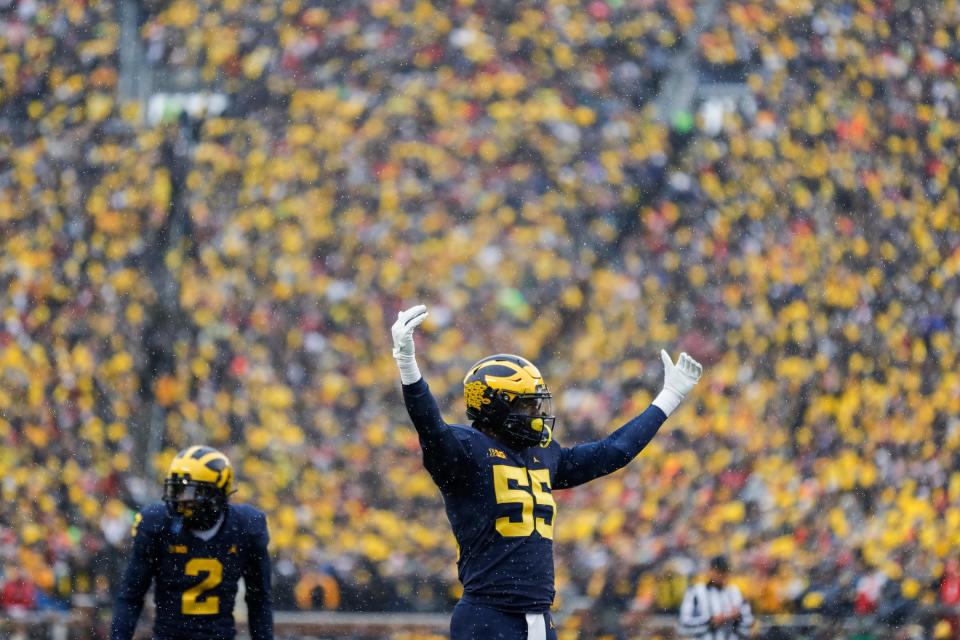 Had Ojabo not suffered a torn Achilles tendon during his pro day, I would have had him ranked higher on my list of edge defenders than his Michigan teammate Aidan Hutchinson, and while Ojabo may have to take a medical redshirt to start his NFL career, he’s a perfect fit in a new Ravens defense now led by Mike Macdonald – who was Ojabo’s defensive coordinator in 2021. The Ravens were wise to take Ojabo with the 45th overall pick, and when he’s healthy, he’ll allow Macdonald to deploy more static fronts as Baltimore’s coverage concepts expand.