The operators of electricity storage batteries are emerging as rare winners from the UK energy crisis, as the need to prepare for the threat of blackouts this winter intensifies and market volatility increases.

The batteries help the electricity grid function, providing more energy when demand outstrips supply and storing excess power. Gresham House and Pivot Power are among the companies benefiting from rising volatility in the electricity market as they sell the power to the grid when prices are high and charge up the batteries when they are lower.

“There’s a huge advantage of being active now,” said James Bustin, investment manager at Gresham House, the UK’s largest battery storage operator. “As a result of the energy crisis, we’ve had volatility reach record levels, and batteries make money off of the highs and lows.”

Gresham House and Pivot Power develop and manage battery storage sites. In a sign of the booming market, energy storage batteries are generating almost three times more money than they were two years ago, according to Modo Energy, a research group that tracks battery storage performance.

The operators are able to benefit from the surge in electricity prices, which are set by the marginal cost of the last generating unit turned on to meet demand, which is usually a gas-fired plant. At the same time, they have largely escaped the rising commodity costs hitting the companies that actually make the batteries.

Mikey Clark, chief operating officer of Pivot Power, an energy storage developer acquired by EDF Renewables, said that the batteries would help National Grid to prevent blackouts over winter given the speed of their response.

“Batteries contribute to stability and are an important part of National Grid’s arsenal to stop us getting into that position [of a blackout],” he said.

National Grid, which in the early autumn will release its own forecast for the balance between demand and supply over the winter, declined to comment.

The growing importance of renewable energy in the UK in recent years has spurred the use of the batteries, which can store the typically more erratic supply from wind and solar and are designed to help smooth out any imbalances between supply and demand.

Britain has roughly 1.7 gigawatts of such batteries operational and the pipeline for future battery-based projects has climbed 65 per cent since early 2021, according to RenewableUK, a trade body.

Investors have already backed some of the companies likely to enjoy a windfall. Gresham House Energy Storage Fund, a London-listed fund that invests in battery storage, has delivered total returns of 93 per cent since listing in November 2018 compared with a 21 per cent gain in the FTSE All-Share index.

Julian Jansen of Fluence, a battery storage services provider established by German engineering group Siemens and US utility AES, said that the energy crisis has introduced volatility into the market much sooner than many expected. 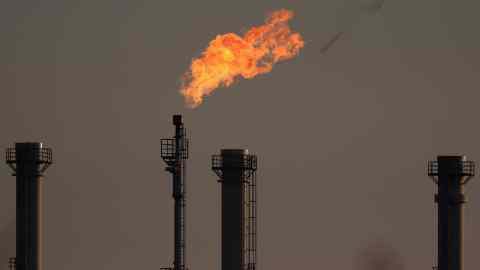 “We are getting an accelerated glimpse into the future of what the system would have looked like in a few years’ time when we would have had much higher levels of renewables, more volatility and decommissioned coal plants,” he said.

Electricity storage batteries, however, are not regarded as a silver bullet for a grid that over the long term is likely to rely more on renewable energy, whose supply is less predictable, as their storage capacity is limited.

But with the energy crisis set to intensify as the winter approaches, the companies behind the batteries should do well, said Tom Smout, a senior associate for flexible energy at Aurora, a consultancy.