According to recent PMI reports, the third quarter of 2022 could also see negative GDP growth. Will gold finally rally then?

Economic Slowdown Is Likely to Intensify

The latest S&P Global Flash US Composite PMI does not bode well for the US economy. The headline Flash US PMI Composite Output Index declined from 47.7 in July to 45 in August, as the chart below shows. It was the second successive monthly decrease in total business activity. The drop in output was the steepest seen since May 2020. Actually, excluding the pandemic period, “the fall in total output was the steepest seen since the series began nearly 13 years ago,” as Siân Jones, Senior Economist at S&P Global Market Intelligence noted.

It was also broad-based, with both manufacturers and service companies registering lower activity, although – interestingly – service sector firms recorded the steeper rate of decline. The S&P Global Flash US Services Business Activity Index declined from 47.3 in July to 44.1 in August, while the Flash US Manufacturing Output Index dropped from 49.5 to 49.3. However, the overall manufacturing activity remained within expansion territory, as Flash US Manufacturing PMI posted at 51.3 in August, down from 52.2 in July. But this index fell to its lowest level in just over two years. Coupled with two quarters of negative GDP growth, it doesn’t look the best economy in modern history.

OK, so what’s happening in the US economy? Why is the output declining? Well, the culprits are – who would have guessed it? – inflation and the Fed’s tightening cycle. Surging prices and hikes in interest rates simply squeezed the real disposable incomes of Americans and reduced their spending. The supply issues, such as material shortages and delivery delays, also did not help producers. Oh, and one more thing, rising costs: although the rate of producer price inflation slowed down, rising wages, transportation surcharges, and supplier costs pushed up business expenses. Additionally, although it’s another report, new home sales plunged 12.6% to 511,000 units in July, which also shows the negative impact of higher mortgage rates.

This is in line with what I wrote some time ago: a recession (or a serious economic downturn) is practically inevitable, as either the Fed’s tightening of monetary policy or inflation on its own will lead to a decline in economic activity. You see, the dichotomy between inflation and recession is a false one. The actual choice is between a recession with high inflation or a recession with moderate inflation under control. Inflation distorts the economic structure, and it was obvious from the very beginning that high inflation would severely hit the economy. This is exactly what we are observing right now.

I don’t have good news about the future. Why? Inflation, even if it has peaked, will remain elevated for several, if not a few months. Similarly, although the Fed is going to slow down the pace of hikes in the federal funds rate, it will remain hawkish for some time (at least until there is a big increase in the unemployment rate or a really serious economic crisis or strong recession) . Hence, the downward pressure on people’s disposable incomes will continue, dampening further the pace of economic growth. The decline in new orders was the sharpest in over two years, as the composite survey’s new orders index dropped from 50.8 in July to 48.8 in August.

What do the recent PMI reports imply for the gold market? Well, the immediate reaction was rather limited, as one can see in the chart below. The fact that the steep decline in PMI was not able to move gold prices decisively higher is disturbing. 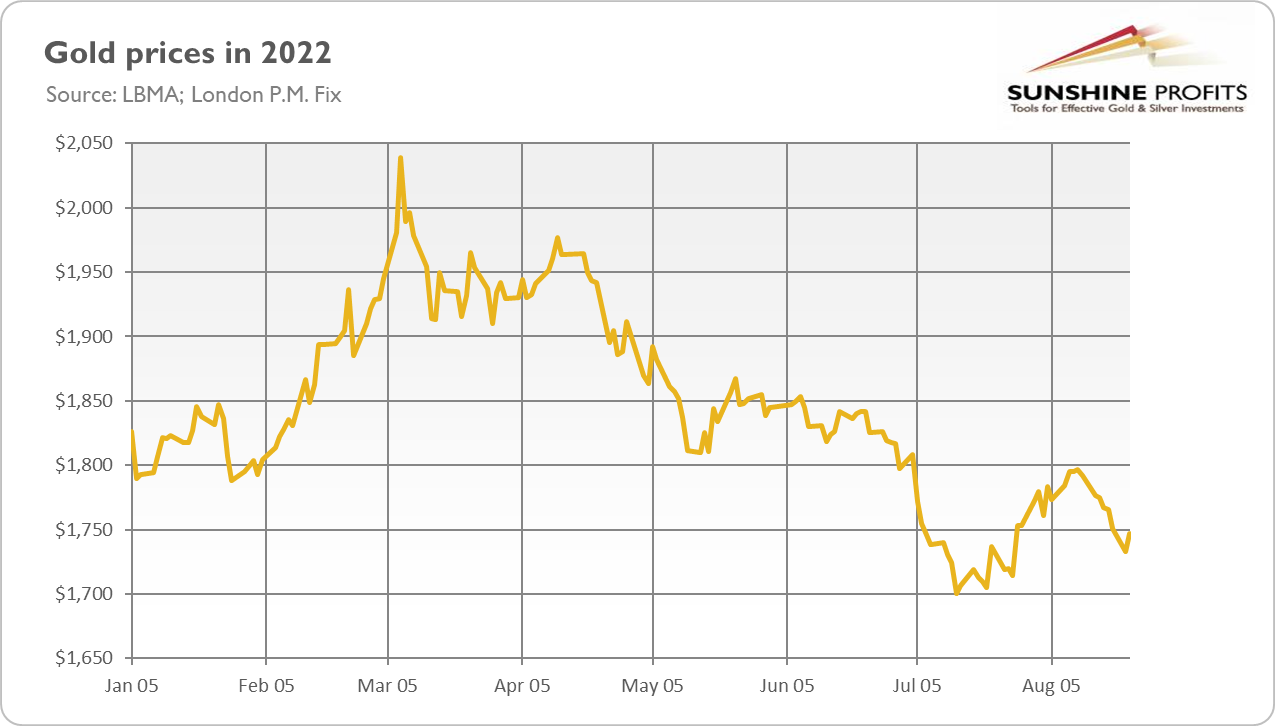 However, from the fundamental point of view, the slowdown in economic activity should be positive for gold prices. It brings us closer to stagflation and increases the odds of a more dovish Fed in the future. Anyway, tomorrow Jerome Powell will speak at the Jackson Hole Economic Symposium. Who knows, maybe this will even provide a catalyst for the gold price. If the Fed Chair is more dovish than expected, the yellow metal could gain. However, if Powell delivers a more hawkish speech than anticipated, gold prices could go down. You have been warned!