It may not be born electric, but the Mercedes EQB has everything and more to take on the sub-Rs 1 crore luxury EV market in India.

The EQB will be the third all-electric car in Mercedes-Benz’s India portfolio expected in showrooms by the end of the year. It follows the EQS 580 that is set to launch in the festive season. Launching two EVs (AMG EQS 53 4Matic+ will launch on August 24) in the space of six months shows the clear intent of the world’s oldest carmaker to up its game in the priciest but most action-packed sliver of the EV market. Sure, the overall sales of luxury EVs are still minuscule, but the gold rush has begun. Starting at the pointy end of upwards of Rs 1 crore, launches are now moving downstream to the more ‘affordable’ sub-Rs 1 crore space. In this fast-evolving scenario where cars like the BMW i4 and Volvo XC40 Recharge make luxury EVs seem like great value, the EQB can’t come a day too soon. At an estimated price of Rs 80 lakh, it will be substantially cheaper than the EQC (B is less than C, remember the nomenclature?) but not quite as cheap as the smartly priced Volvo XC40 Recharge (Rs 56 lakh). But the EQB has an ace in its cabin – an extra row of seats.

The EQB will be the first 7-seat EV in the country and a big draw for anyone who wants the flexibility that a third row of seats offers. In terms of design, the obvious reference point is the GLB, but since it’s not on Indian roads yet, it’s hard to draw comparisons with its ICE counterpart. What’s clear is that the EQB looks quite conventional, like any Mercedes SUV, and doesn’t have too much ‘EV-ness’ in its design.

That’s to be expected when you convert an existing ICE car into an EV, you are stuck with the same body structure and ‘hard points’, so designers don’t have the freedom a born electric platform offers. Case in point is the mind-blowing EQS I drove earlier, which is so futuristic that it doesn’t look like a Merc at all. 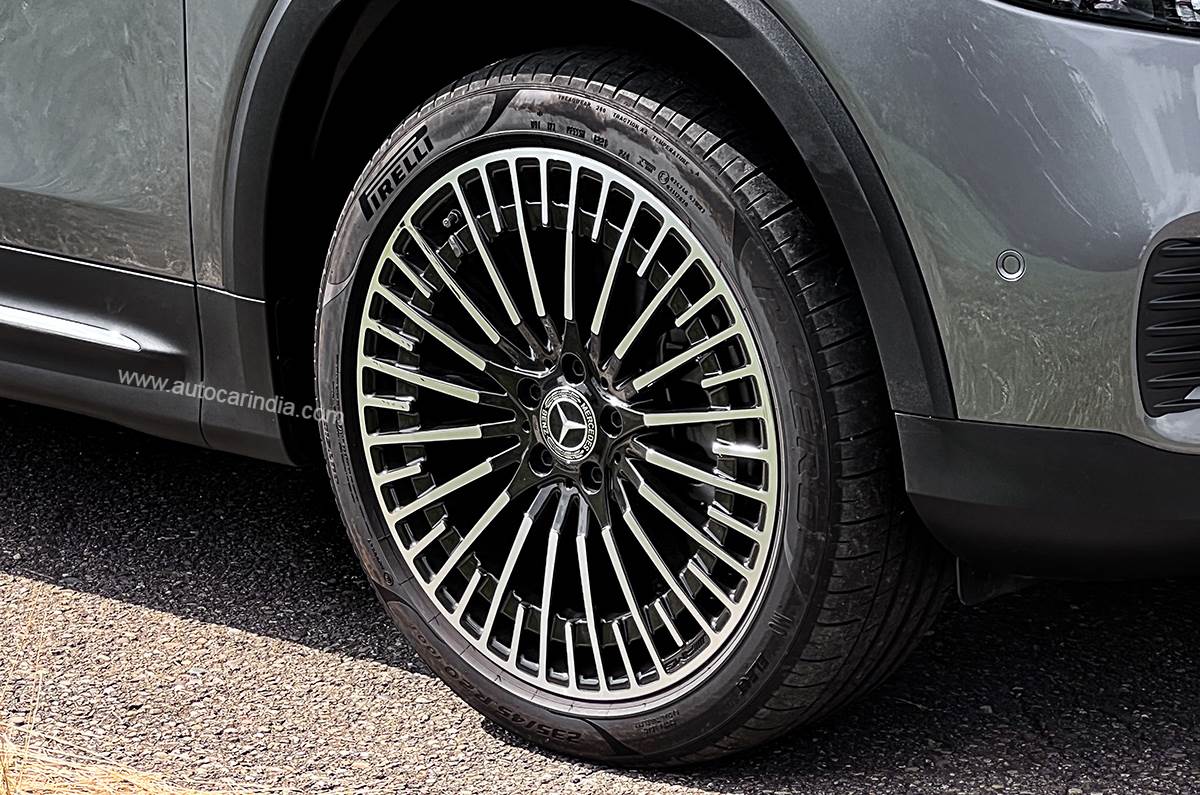 Wheels look like they were designed in a wind tunnel.

A blanked-out grille finished in glossy black, a thin light strip connecting the lights and grille, wheels that look like they’ve been designed in a wind tunnel (to cut drag and increase range), tail-lights that stretch across the tailgate , and a smattering of EQB badges are the only real hints that the EQB is an EV. The long and high bonnet (identified more with an ICE car than an EV), the strong shoulder line and beefy squared-off wheel arches are elements that draw from the same DNA as other Mercs. The EQB is not a very aerodynamic shape but that upright stance has a charm of its own. 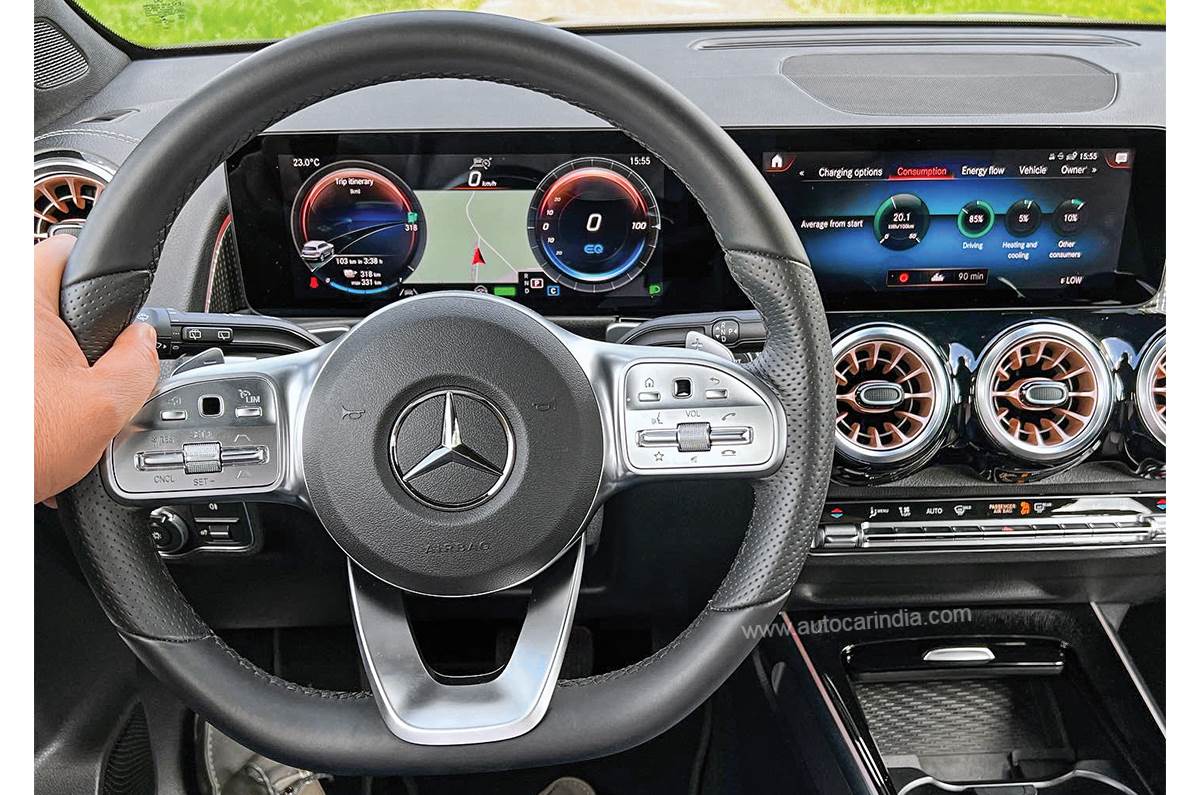 Tactile buttons on steering feel great to use; Screens easy to navigate.

Except for a splash of electric gold on the exquisite turbine air vents, the interiors too don’t shout EV. Forget the EQS’ hyperscreen, the EQB doesn’t even get the large central infotainment screen found in the S and C-Class but instead gets Merc’s standard MBUX system made up of two 10-inch screens stacked side-by-side. It’s easy to navigate through all the menus and the shortcut keys help you access specific functions without sifting through too many commands. What I really liked were the steering controls, which still had tactile buttons and not the annoying capacitive thumb pads in the latest Mercs. For additional tactile feel, you can try the touchpad in the center console but it’s a bit too sensitive and it’s easier to just swipe the screen even if it leaves dirty smudges. 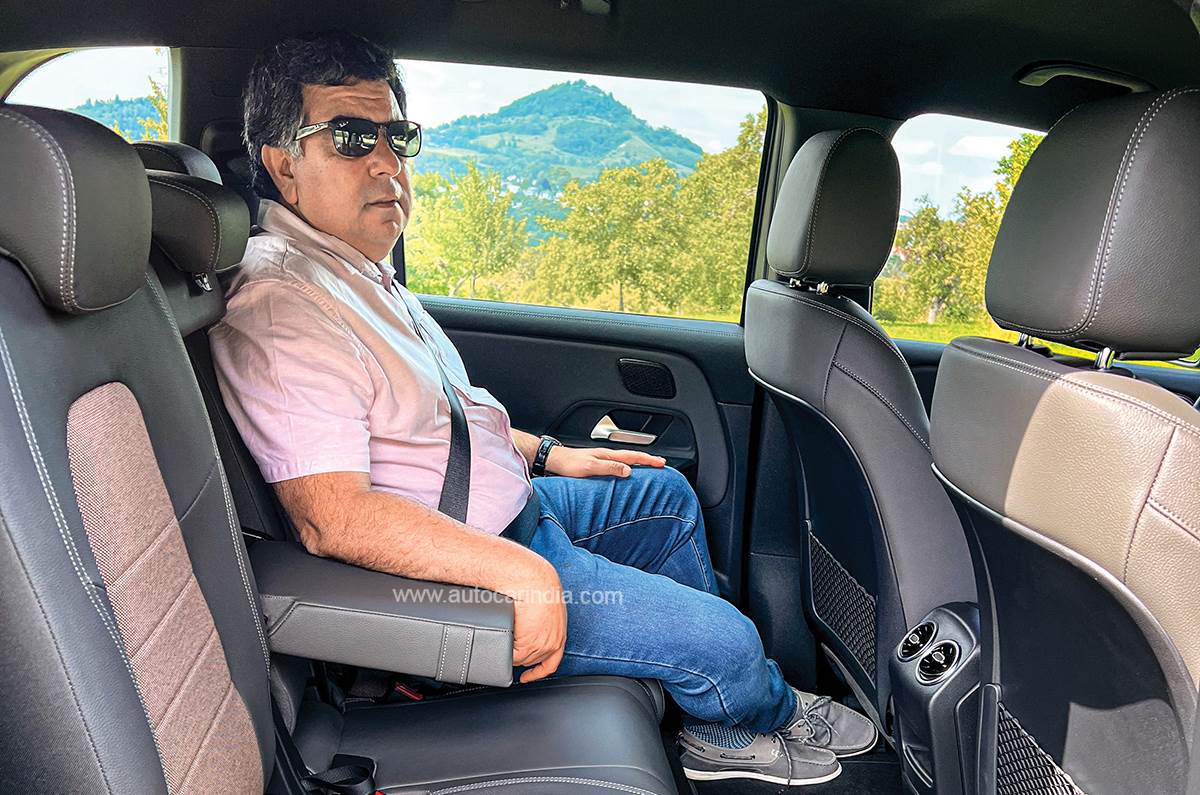 High seats, generous headroom and legroom make the second row a nice place to be.

The driving position is nice and high, which gives you great all-round visibility. The seat is generously cushioned, and although it’s a bit on the firm side it is really comfortable on long drives. The rear seats have great legroom and an abundance of headroom, so space is not an issue. Also, the seats are placed nice and high, so you get a good view of the road ahead. There’s enough room for three adults as well, and the middle passenger won’t have to contend with a transmission hump as it’s been smoothened to make way for a flat floor. The floor, however, is a touch high, as the battery under it has encroached into the cabin space, pushing your feet up a bit. It’s not uncomfortable though, and Mercedes has cleverly raised the ‘H’ point to compensate. 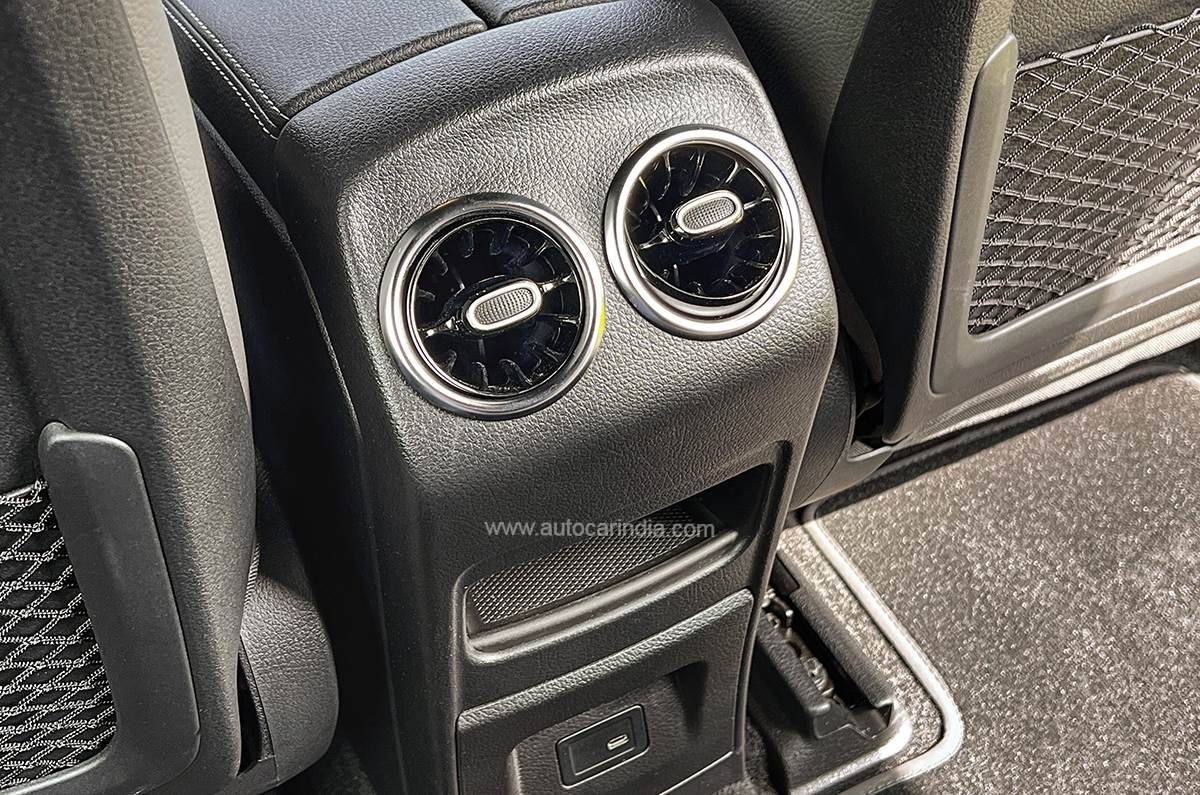 Sadly, I couldn’t try out the third row because the test cars we had in Europe only came with a 5-seat configuration, so we’ll have to wait for the India-spec EQB to see how usable the two jump seats at the back are. With no third row, luggage space is a generous 495 liters, which expands to 1,710 liters with the seats flipped down. 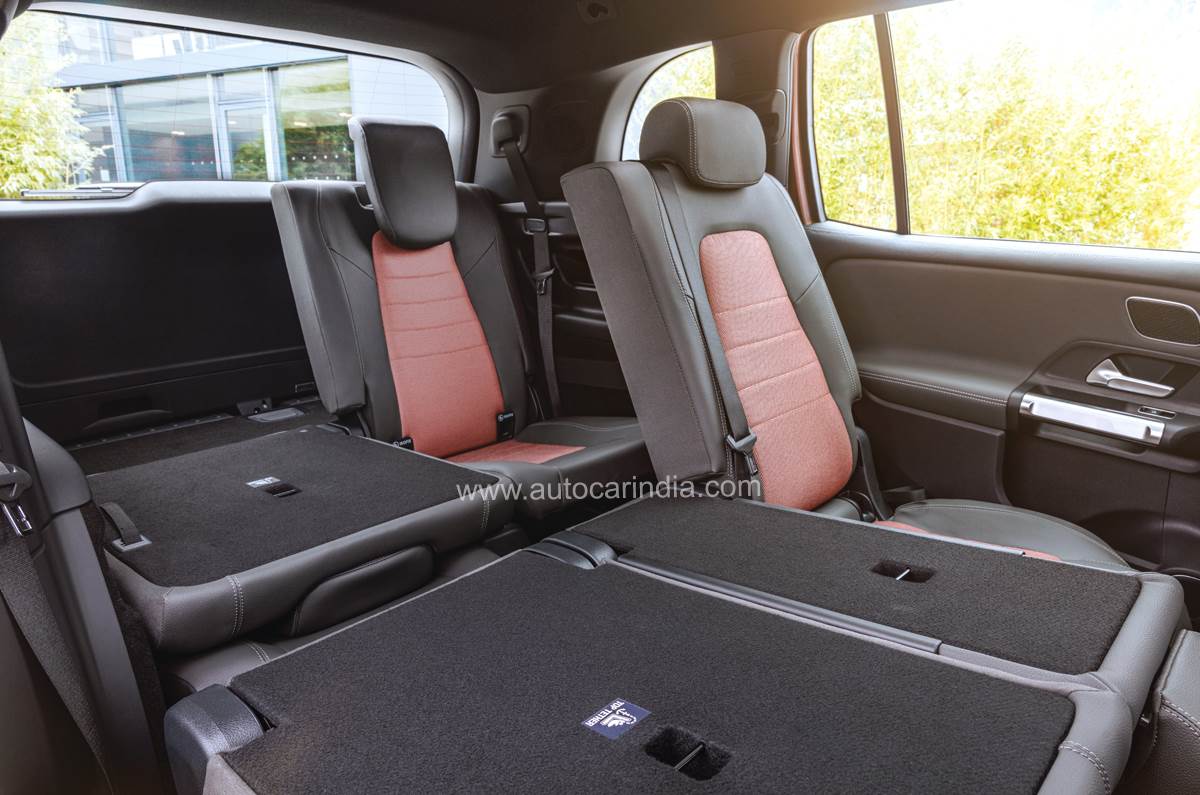 Although our test car didn’t have them, India-spec EQBs will get two small third-row seats.

The EQB comes with two power outputs – the EQB 300 develops 228hp, while the EQB 350 produces a healthier 292hp. Both versions use a 66.5kWh battery and offer the same claimed range of around 400km, but in real-world driving conditions, 300-320km is what you can expect, which isn’t great by modern EV standards.

For India, the specs aren’t finalized yet, so we could either get the EQB 300 or EQB 350 but not both. It’s likely that Mercedes-Benz India will opt for the lower 300 to be price competitive in the sub Rs 1 crore EV market, which is fast heating up. 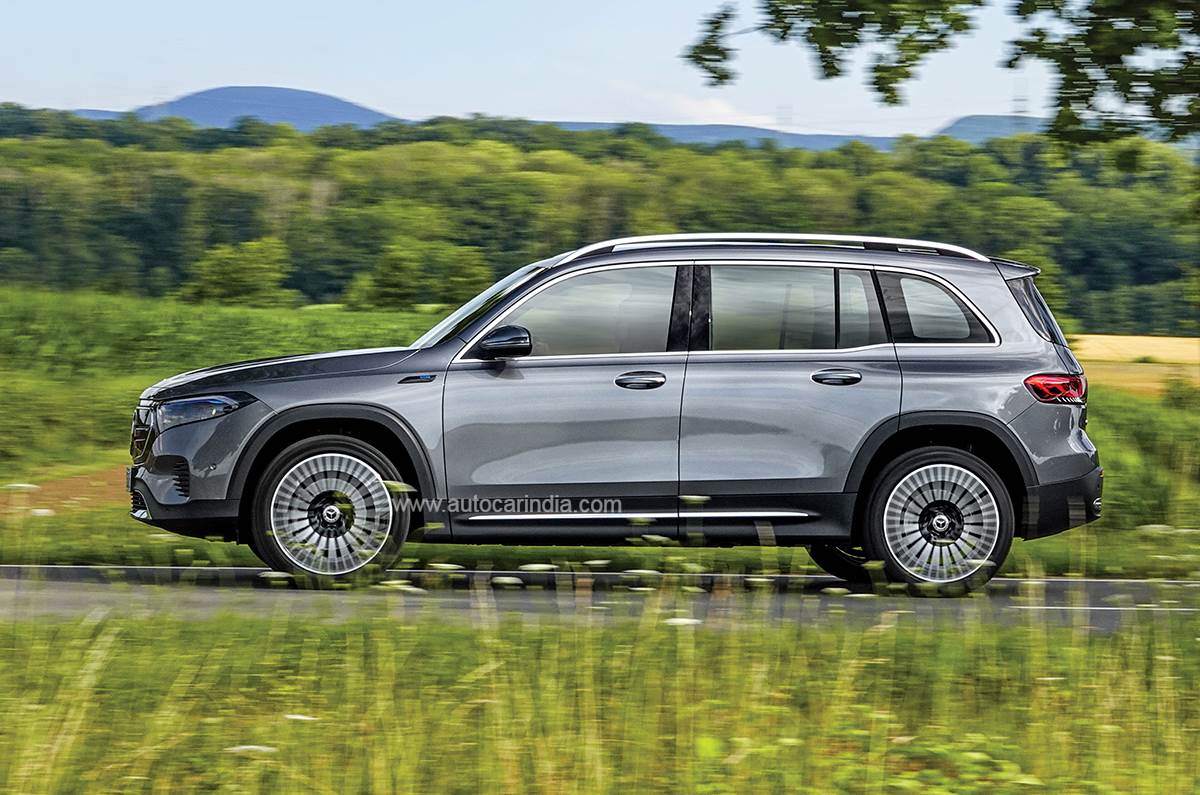 It rides with authority and confidence at speed.

The variant I drove though was the EQB 350, which, with a 0-100kph time of 6.2sec, felt reasonably quick and whisks you to the speed limit (80-100kph on rural roads) quite easily. The derestricted or speed limitless sections, which German autobahns are famously or infamously (if you are a politician or activist) known for, are far and few between, so when I saw the white roundel with four thin lines across, I floored the EQB 350 to see what it could do.

Acceleration isn’t the neck-snapping kind you find in other EVs, notably the Volvo XC40 Recharge, which I have to say from a performance and price perspective gives more bang for the buck. There’s the nice seamless tug all the way to 130kph but after that the power starts tailing off quite rapidly. I would imagine the EQB 300, with a 0-100kph time of 8.0sec, will be slower still. Flat-out performance is clearly not the EQB’s forte and where it feels best is at city speeds. It’s nice and perky off the line and the linearity of the power delivery makes it comfortable too.

The drive modes – Eco, Sport, Comfort and Individual – tweak the accelerator and steering response, whilst there are separate controls for the regenerative braking which can be easily adjusted via the paddle shifters. What’s brilliant is the way the brakes blend seamlessly with the regeneration to offer a natural feel. In this respect, the EQB’s brakes are even better than the high-tech EQS’, which feel artificial in comparison. 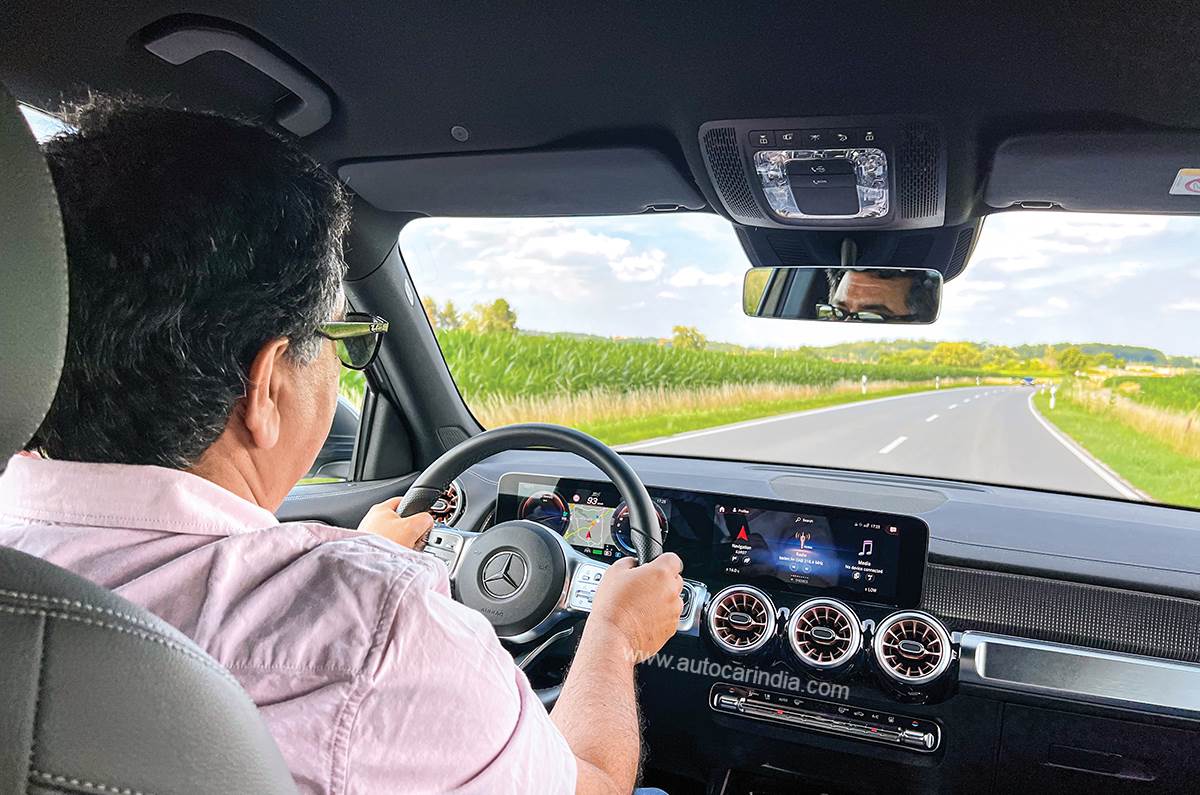 The EQB’s measured performance is reflected in the way it rides and handles too. Weighing 2,580kg, it rides with authority and is very confidence-inspiring at any speed. The roads in Germany were too smooth to judge how well the EQB copes with rough patches, but the odd bump was nicely smothered, and we wouldn’t be surprised if it emerges as the most comfortable riding EV for the price. The steering too is superbly calibrated, offering enough heft in corners and the right amount of slack around the straight-ahead position. There is a bit of body roll but the batteries in the floor keep the EQB nicely tethered to the road. All EQBs are 4Matic or all-wheel drive, with a motor at each axle. The one at the rear is the stronger of the two but whilst driving you’d be hard pressed to tell if it was the front or the rear motor doing most of the work. All this inspires a lot of confidence behind the wheel.

Refinement is just what you would expect from an electric Mercedes, which in a word is fantastic. Road and wind noise, which are the primary source of sound in the absence of an engine, are very well suppressed.

The EQB may not have the wow factor of other EVs entering the Indian market, but its relaxed character, family-oriented cabin and refinement make a great case for anyone wanting a user-friendly luxury EV runabout.