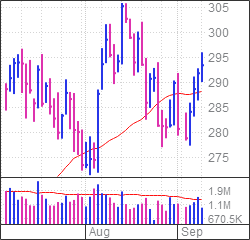 Vertex Pharmaceuticals (VRTX) is the IBD Stock of the Day as the global biotech company climbs above its 50-day moving average. VRTX stock is offering aggressive investors an early entry point.

While dominance in the market for cystic fibrosis treatment has been the driver of the company’s share gains, Vertex has teamed with Crispr Therapeutics (CRSP) to target genetic diseases.

From one technical point of view, shares are extended from a 276.10 buy point. However, Vertex retook its 50-day line last week and could be forming a new base. That may take a couple more weeks.

Aggressive investors could take a position with an entry point of 292.10, just above the Sept. 2 high.

VRTX stock holds an IBD Relative Strength Rating of 96 out of a best-possible 99, according to IBD Stock Checkup. That means shares have outperformed 96% of stocks over the past 12 months. The best growth stocks typically have RS Ratings of at least 80.

In addition, Vertex stock owns an Accumulation/Distribution Rating of B-minus. That rating analyzes price and volume changes in a stock over the past 13 weeks of trading.

In early August, Vertex reported second-quarter earnings of $3.60 a share vs. expectations for $3.47, minus some items. In the year earlier period, Vertex earned only 17 cents a share. A $900 million payment to Crispr Therapeutics in 2021 lowered profit.

Trikafta, Vertex’s biggest moneymaker, generated $1.89 billion in sales, rocketing 51% on a year-over-year basis. Trikafta is a combination of three drugs that can treat 90% of patients with lung disease.

Founded in 1989, the Boston-based company boosted its full-year sales outlook by $200 million. It now expects $8.6 billion to $8.8 billion in sales of its cystic fibrosis, or CF, medicines.

Analysts are closely watching a mid-stage kidney disease program. Vertex is trying to treat kidney diseases tied to mutations in the APOL1 gene — a pool of about 100,000 people in the US and Europe. The condition is known as focal segmental glomerulosclerosis, or FSGS.

In a recent note to clients, RBC Capital Markets analyst Brian Abrahams said, “We believe Vertex has an underappreciated pipeline portfolio that has a fair chance of driving medium- to long-term growth. This includes multiple programs with potential updates even this year such as in genetic kidney diseases and hemoglobinopathies.”

Meanwhile, Crispr Therapeutics and Vertex have been working on a gene-editing drug for two blood diseases — beta thalassemia and sickle cell disease.

According to a report, Crispr Therapeutics and Vertex expect to submit late stage trial data, seeking approval for treatment of the inherited blood diseases, to European Union and United Kingdom regulators by the end of 2022.

It’s been a decade since Jennifer Doudna and Emmanuelle Charpentier developed the technology known as CRISPR. Using a pair of molecular “scissors,” they found they could cut into the human genome and change the DNA at the center of some diseases.

Bear Market News And How To Handle A Market Correction

MarketSmith: Research, Charts, Data And Coaching All In One Place